Knowing and Loving – A Celebration 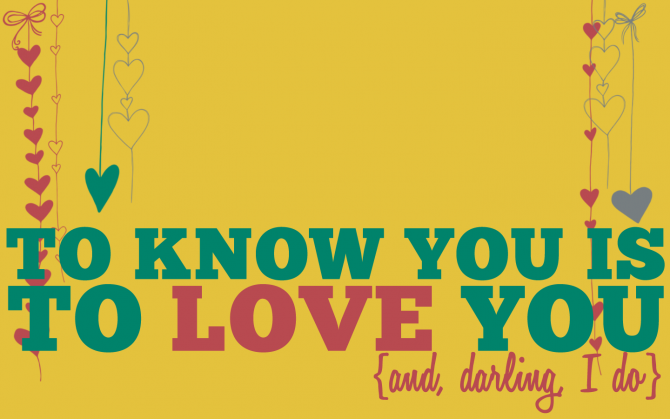 Most of the things I remember from growing up present themselves to me like the snippets in a montage at the beginning of a romantic comedy {or as my best friend so affectionately calls them, “rom coms”}.  I don’t see the moments before or after, but I have these little 4-5 second video clips stored in my brain, and they pop out randomly and surprise me.

Some of the memories I remember are big, significant moments.  Like when my parents told my brother and me they were going to have another baby.  I was 3 years old at the time, and I believe it is my first memory.  Or, months later, after they had said baby, I remember being at the hospital holding my sister for the first time – my yellow and white striped shirt, the orange plastic chair where I sat with her.

But other memories I have are seemingly insignificant.  I remember a friend of ours bringing her pet beagle to our house and him peeing on the fake plant my mom had on the kitchen floor.  I remember once being told to finish the green beans on my plate, and when I fussed, my dad said, “Okay, then just smile for me.”  When I did, he teasingly stuck a green bean right through the new hole where I had lost my front tooth the day before.

One very random and {I think} insignificant memory I have is my mom standing in the kitchen.  I walked up to her, my height only at her waist, wrapped my arms around her and sang, “To know, know, know you is to love, love, love you, and I do, and I do, yes, I do.”  Then she said, “Awww, how sweet!”  And then the memory ends.

I have no idea where or when I learned this song that hit the Billboard 100 in 1969.  And I have no idea why I remember that moment.  But every once in awhile that memory and that song pop back into my head.  Like this morning, when I was thinking about my husband.

My husband, Rod, celebrated his 31st birthday last weekend.  I realize there are lots of girls out there totally enamored by and in love with their husbands, but I truly feel that we have a friendship and a marriage that is uncommonly good.  So rather than go on and on about how much I love him and how he makes me feel and how I can’t wait to see what the next 31 years has in store for us {oh no, I would never do that}, I wanted to celebrate his life by letting you get to know him.  If Bobby Vinton knows anything, if you know my husband a little bit, you will see why I love him so much.

And as a celebration of Rod and love and memories and this song, I’ve created some wallpapers for you to send to your loved one or to just keep for yourself.  Click on each one to download (available for iPhone 4, 4S, and 5 and also for widescreen computer monitors and fullscreen computer monitors) but not before I tell you about my man.

31 things to know about my sweet, wonderful, strong, patient, hot, husband Rod {who is also kind to small animals}…

1. Rod is an athlete. Rod played and then coached college basketball.  And back in 2007 when I was first thinking I liked him, I wrote him a message on Facebook that said, “Hey great game tonight…looks like your boys made a lot of good shots,” because that was about the extent of my basketball knowledge.  And Rod a) continued to talk to me like I was an intelligent life-form and b) waited to make fun of me for that until about 6 months ago.

2. Rod is an author. Rod wrote and published a book some years ago, and his next one is coming out soon.  You should buy them both and promptly read them and then give them to all your friends.

3. Rod likes to do fun things that are also weird. One time, Rod and I sat on the couch for about 20 minutes yawning and, as a result, making each other yawn.

4. Rod draws people to Jesus. When I was in college, my faith was absolutely falling apart, largely as a result of some of the material I was learning in school.  There was one class that was particularly damaging, and every week I would attend that class and then go to Rod’s apartment where he would spend hours helping me pick up the pieces that had been broken in the last hours.  As much as a man can save another man, Rod saved me.

5. Rod is nice to strangers. He talks to drive-thru workers, toll-booth operators, waitresses, bank tellers, and people walking past him on the street in such a friendly, personable way that many of them respond with, “Um…do we know each other?”

6. Whatever the opposite of materialistic is, Rod is that.  Except for shoes.  He can never get enough shoes.

7. Rod is spontaneously creative.  As I write this, he and our child are in the other room making up a song about how they are the best of friends to the tune of the old America’s Funniest Home Videos theme song.  Every time a good beat comes on the car radio, he freestyle raps…and he’s good.  Last year, I came home to find that he had stopped in the middle of reading his Bible to paint verse on the wall in our living room in large red letters.  We kept it.

9. Rod is a confidence-booster.  In spite of all the doubts and ugly self-talk and the sometimes crippling insecurity that is whirling around in my head on bad days, one truth remains strong — to Rod, I am beautiful and talented and fun to be around.  And that, sometimes, is the very ground I stand on.

10. Whatever the nice form of “messy” is, Rod is that.  He doesn’t really pick up things after he uses them, but I don’t really do that either.  It makes for a usually messy home, but it also makes for a website where I can turn junk into treasure, because he doesn’t mind me keeping junk around while it waits to become treasure.

11. Rod is a preacher. He beautifully blends storytelling with well-researched topics, and I’ve lost track of how many people have come away from his sermons and told me what a gifted, inspirational, just-what-they-needed speaker he is.  You can hear some of his sermons here.

13. Speaking of Rod’s skin, he has vitiligo.  It’s the disease that allegedly turned Michael Jackson’s skin white, and Rod has a patch of it on his arm that grows bigger every year.  I hope when he’s old, he’s all splotchy, because I think that would be cool and interesting.

15. Rod is good with kids.  To me, one of the most difficult things about hanging out with kids has always been their need for repetition.  The classic “do that again!” can only go so far with me.  But with Rod, he will keep throwing them into the air or spinning them around in circles or making some weird noise that is making them laugh until they finally tell him they’ve had enough.

16. Rod is trustingly generous.  Whenever someone asks him for money, he either gives it to them or finds a way to get them whatever they are asking for.

17. Rod is a leader.  I wish that word wasn’t so…used.  Because it feels cheap to call someone that.  But really.  He takes things and makes them better and people trust and follow him.  Everything from a ministry at a church to an entire basketball program at a college.  Sometimes, he’s in a room with a bunch of people and all he has to do is say, “Everyone jump up and down three times” and they will!

18. Rod is funny.  His humor is dry and quick and witty or sometimes obvious and slapstick-ish.  See for yourself by watching a Nooma by Rob Bell and then searching for “Spoofa” on YouTube.  Or, to save time, just look at this picture… 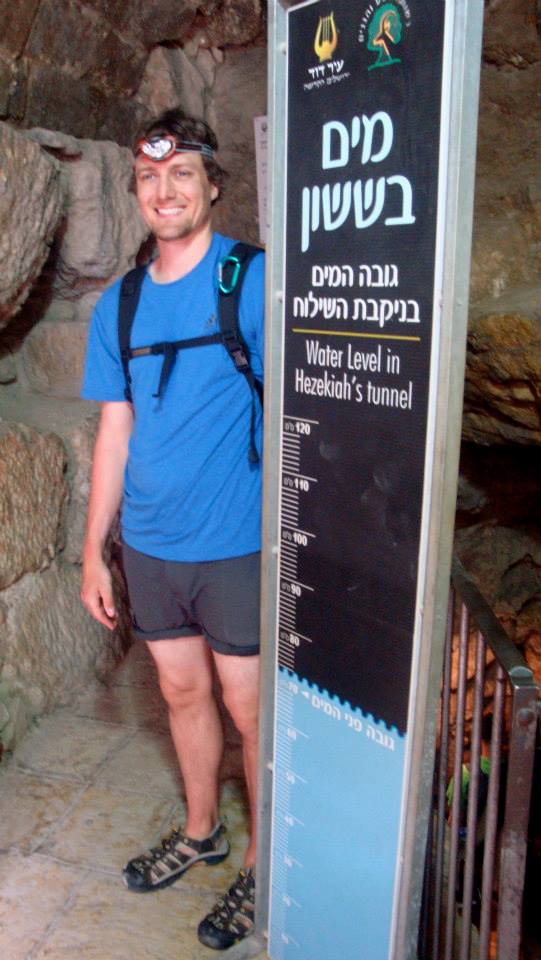 19. Rod is passionate.  Just like “leader”, “passionate” is such a buzzword right now.  At our wedding, Rod’s best man’s entire speech revolved around passion and all the ways he has shown passion in the past and how passionate he would be about his wife, me, in the future.  It was spot on.

21. Rod respects and uses grammar properly.  Even in text messages…which is very important to some of us out there.

22. Rod is content.  Whether we’re talking about plans, meals, how our home is situated, who we are going to spend time with tomorrow, he is genuinely happy with whatever.

23. Rod is a getter-don-er.  If you know anything about the Strengthsfinder, Rod has the Strength of Activation.  That means once he decides he is going to do something, he does it as soon as possible…usually immediately.  And combined with his great mind and beautiful passion, that means lots of wonderful things get done in a very short period of time.

25. Rod has a good memory.  He remembers almost every paragraph he has ever read, including what book it was in and where in the book it can be found.

26. Rod is a good daddy.  We’ve only been parents for about a month, but the way he cares for, encourages, disciplines, plays with, and loves that little boy…he should teach a class or something.

27. Rod is a servant.  He does all the dishes in our house.  He takes out trash.  He carries heavy things.  He entertains the young’n while I write long blog posts.  He helps me at work when I’m in too deep.

28. Rod is musical.  You wouldn’t know it, because he’ll never perform.  But he can play the guitar and the piano and he can sing really well.  We’ve been working on how to harmonize lately.

29. Rod doesn’t mind cussing.  One of our favorite jokes is using cuss words completely out of context to shock the other person into fits of laughter.  I’m sorry if that is offensive to you.  But I really hope it’s not.  You should try it sometime.  You’ll see how it feels.

30. Rod will change the world.  He has changed the worlds of so many people around him.  I am sure things are just getting started.

31. Rod is my husband.  Because I know after reading about all of this awesomeness, you are probably on the verge of smitten.  Too late.  I get to keep him forever.

Click on the image you want to open a full-size version of it.

Then save it to your device and set it as your wallpaper. 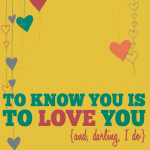 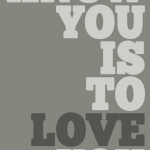 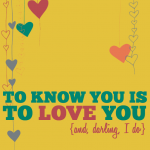 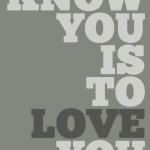 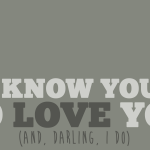 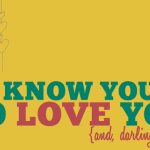 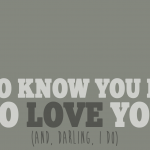 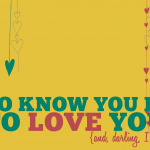